At the start of June 2021 I made this little build. Inspired by the architecture of Minas Tirith (LOTR). A wedding present for Richard and Brittney in the US. Since I liked the way this little build turned out I wanted one for myself as well so soon after I finished the first build I copied the building for myself.
YouTube video: https://www.youtube.com/watch?v=VsbYZ8NGC1Q

After I finshed the first building (as described in the introduction above) I decided that I needed another building that will stand alongside this first house. I also want a road in front of these houses and a wall piece as well. 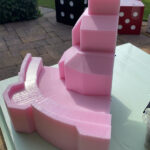 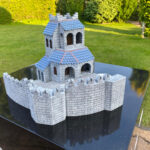 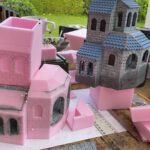 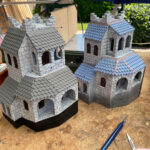 Before I can determine the size of the road and wall I placed the house on a cardboard sheet and start drawing the layout of this slightly larger build.Oh well, slightly larger became a bit large even more. I drew a street section and after half an hour I had a street plan with houses on both sides. I guess we are going for a larger street section. 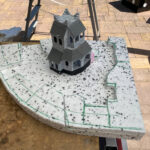 I used three EPS foam sheets 100x 100 cm and 2 cm thick and cut a quarter circle of about 90 cm from the center to the edge. I work with three layers since the street has a slope of about 7%
I cut the street section out of the EPS foam so I can fill it in with XPS foam parts. 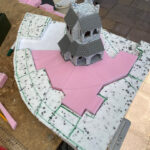 Next is filling up the street with EPS foam. Working with small foam parts and deliberately working with seams in the pavement that will have its use later on. At some point I want to structure the pavement with a cobblestone like texture. Since I like to structure by hand I think this will be quite a task. But that is something for later….

Now that the street is done it is time to add some foam blocks along side of it. Cutting these blocks in a way that they fit in their spots already give me some idea of how the street will look like in the future.

While placing block after block with the layout getting more and more visual, I decided to extend the street some more by adding a large piece of EPS foam on one side of the existing street. I also added another layer of 2 cm EPS foam underneath the build. The street will now go up roughly 10 cm from once side of the street to the other side of the street. 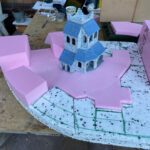 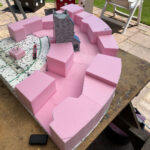 At the end of the first week of this build I ended up with one house being built, a curved street that goes up roughly 3,5 inch in height and 11 blocks (future builds) along side of it. So now I have to start transforming each block in some kind of structure.

Although this is the next logical step I am already thinking about the wall section that has to be placed alongside the houses on the outher side of the circle. And yes, there has to be a wall on the inner side as well.

Starting with adding a curved wall behind the build. The height of this wall is determined by the finished House since I want this house to be lower than the wall behind it. Time to start with the second house. I have no planning as far as the order in which I build, I determine, while building, what to do next. The house on the left will be next. The build has to be a bit lower than the finished house, it needs a balcony and some kind of dome. 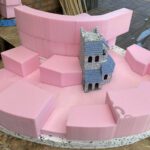 Since I am working with solid blocks I start by cutting out the walls. I cut away the foam that is inside the block leaving a shell which in this case are the walls of the build. Sometimes I repeat this so I get a wall section with a wall section (double wall). When I cut windows and doors, I start with a larger opening, the wall that falls behind it will also get the same opening only smaller so now I get a lot of depth in my build. 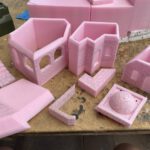 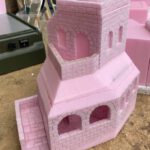 Making the first floor a lot smaller, makes the build look more interesting and it leaves a space for the balcony. Since the road alongside the house is descending quite a bit I have to add a small stairway that leads to the porch and front door. 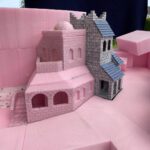 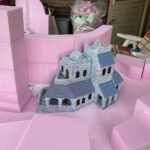 These two houses work well together and with the future wall behind them I can also start thinking about this tower on the right.

Since everything is still loose I can show you the setup and layout of this project. Four sheets of foam stacked together form the slope of this build. The road is first drawn onto the foam “R” and is partially lowered in the foam sheets and partially on top of the foam. Possible locations for towers and Houses are marked. And finally the first basic setup of the street. 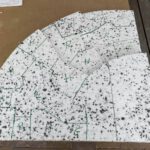 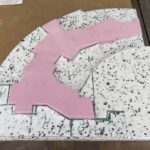 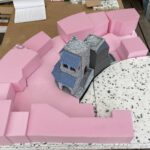 While glueing the xps sheets (supported by large bricks) I start cutting the outer wall freehand. This wall is 20 cm high (2 sheets stacked) and 5 cm wide. Looks a bit too fragile so I will remake this wall and make is twice as thick. But for now it helps me to determine the hight, shape and positioning of higher and lower structures. 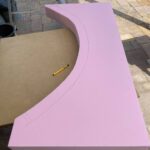 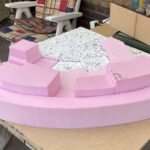 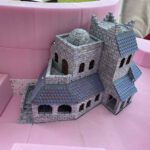